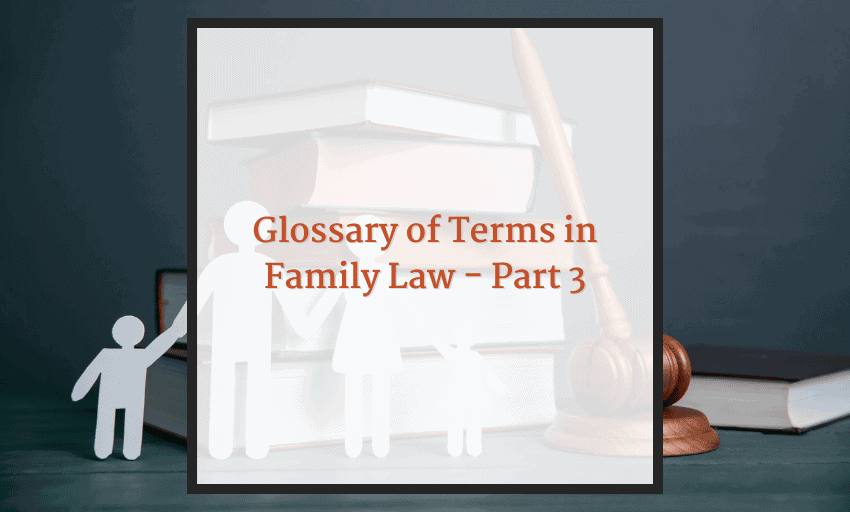 And we come to the final article on terminology for Family Law. Here you can click to part 1 and part 2 and take advantage of the information when you talk to your lawyer about your case.

The resumption of the marital relationship and cohabitation after the parties have separated. If there is a separation agreement, it should be rescinded in writing to avoid problems.

Limitations on a gift which conditions it on the donee or legatee marrying within a certain religion or nationality have been upheld by courts; conditioning a gift on the person never marrying is an invalid provision.

The United States Supreme Court has ruled in several seminal cases that same-sex marriage is constitutionally a right of the parties and that it is illegal for state authorities to deny such couples the privileges of a marriage license and a legitimate marriage equal to heterosexual couples.

Upon dissolution of a same-sex marriage, legal questions abound as to the rights of spouses to custody and visitation of the biological children of their spouses. There is little precedent to guide the courts in the evolving area of the law.

May be called a Separation and Property Settlement Agreement. This usually refers to the final settlement between two spouses prior to the completion of the divorce and the division of property by agreement. May include the parties’ agreement on spousal support, alimony, child custody, visitation and support issues, or refer to existing Orders where any of these issues have already been resolved.

Call me now and we’ll discuss your Family Law case!

A Court-ordered or agreed arrangement where a child spends significant time with both parents and where there is an equal sharing of the legal rights in regards to the child.

A divorced spouse can collect on her former spouse’s social security benefits, to add to her own benefits, if the marriage lasted at least 10 years or longer, even if the spouses have remarried. The applicant must be 62 or older.

During the separation, the higher earning spouse may be ordered to pay support to the lower-earning spouse. After the divorce such support is called alimony.

The child of one of the spouses by a former marriage. A child whose natural parent is in his or her second marriage and where the child has not been adopted by the current spouse.

Where a parent has been abusive or has a debilitating drug or alcohol problem, the court may order that visitations be conducted under supervision. In many instances, if the parent performs properly for several visits, unsupervised visitation may be gradually restored.

Surrogate parenting is an arrangement in which one or more persons, typically a married infertile couple (the intended rearing parents), contract with a woman to gestate a child for them and then to relinquish it to them after birth. Complications do arise, especially when the surrogate decides later that she wants to exert contact with the child.

Joint or separate tax returns of the spouses in a support matter are very important documents that must be produced to determine the actual income of the parties.

When parties separate or when a petition for custody is first filed, the court may issue a temporary court order awarding custody to one of the parents, usually the one currently with possession of the child.

In modern practice, an uncontested divorce will be accompanied by a complaint alleging irreconcilable differences, irretrievable breakdown of the marriage, and an uninterrupted separation for a period of the statutory minimum, usually three years. Some states will expedite the granting of the uncontested divorce when the parties sign Affidavits of Consent in which each party requests that the divorce be granted.

Adopted by all states, it provides uniform rules for the courts in respective state to decide which court shall take jurisdiction to decide a child custody case. The courts try to determine which state is the child’s “Home State” and most often that will be the state of jurisdiction.

The Uniform Marriage and Divorce Act, UMDA, is a 1970 model statute that defines marriage and divorce. The greatest significance of UMDA is that it introduced irreconcilable differences as the sole ground for divorce. UMDA has been partly enacted only in a handful of states.

Passed in some states, it contains basic rules that apply to making a valid prenuptial agreement. Prenups are usually requested by the party that stands to lose the most money or property in the case of divorce. It allows for the less wealthy spouse to waive his or her interest in the other’s property. These agreements are usually enforced as valid contracts unless the wealthier spouse did not reveal his or her total assets.

A ward is someone placed under the supervision of guardian.

Wishes of the Child

In a custody contest, the court will ask the children which parent they would prefer and why. For older children, the court is more likely to pay significant weight to the child’s wishes.

At Lopez Law Firm, We sit down with you and get to the heart of your family law case, trying to find the best solution for you and your family. Schedule your consultation today!